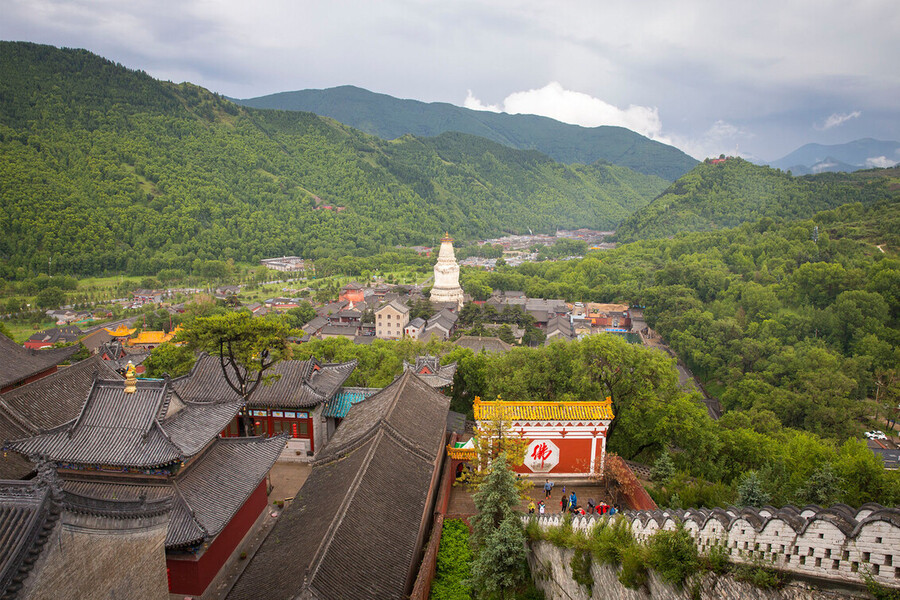 Where is Mount Wutai?

Mount Wǔtái (五台山 Wǔtái Shān), is one of the four Sacred Buddhist mountains of China. It is a UNESCO World Heritage Site in Shanxi Province in China. “Wǔtái Shān” means Five Plateau Mountain. It is a popular pilgrimage 朝圣 destination for Buddhists. The weather in wutai mountain remains cool in summer, but freezingly cold in winter.

What to see in Mount Wutai ?

You may plan 2 or 3 days to stay in Wutai mountain. You may visit the temples for one day, tour in five plateaus for another day. Some monasteries are free, some large monasteries charge up to 10 yuan entrance ticket. Here are the places you should go to visit :

Púsà Peak 菩萨顶
Púsà Peak. (菩萨顶 Púsà Dǐng aka Bodhisattva Terrace)
Pusa peak is in the north of Xiǎntōng Temple and Tǎyuàn Temple. There are two big temples in Táihuái town, Xiǎntōng Temple and Tǎyuàn Temple. Both temples are in the west side of the Qīngshuǐ 清水 river. A good way to see these is to start at the top of the hillock that they are on (Púsà Dǐng), and walk down the hill through all 3 monasteries. This way you walk down, not up the flights of 108 steps that represent the 1080 annoyances of Buddhism. Pusa peak was the place where several emperors lived there before when the royal members came for pilgrimage .

Xiǎntōng Temple (显通寺 – Xiǎntōng Sì).
Xiǎntōng Temple is one of the largest Temples. Buddhism took over from Daoism as the main religion in this area.

Dàiluó Peak (黛螺顶 Dàiluó Dǐng)
Dailuo peak is located on the east side of the Qīngshuǐ 清水 river and the middle of the mountains, lower than the five plateaus, but higher than the most temples. To view from this peak, you can overlook Xiǎntōng Temple, Tǎyuàn Temple and most of Táihuái village. There are 1080 steps up to the top. There is also a cable car to take you most of the way up and down, ticket at 30 yuan. The foot of Dàiluó Peak is also the starting point to the five plateaus, where you can find the ticket office for the minibuses.

The Five Plateaus (五台顶 Wǔtáidǐng)
The name of Wutai mountains comes from the five plateaus, but it does not mean you have to see all Five Plateau ‘Mountain’ (五台山 Wǔtái Shān) although many people do. Each plateau has a Buddhist monastery. Many minibuses leave each day from the foot of Dàiluó Peak in the centre of Táihuái village to tour all five plateaus in succession, fewer minibuses just visit one plateau. It takes about eight and a half hours to go around all five plateaus with 30 minutes stop at each plateau and a 40-minute break for lunch. It means lots of time in a minibus for some people. The buses run on bumpy roads and only allow 30 minutes actually spent there. Seeing all five plateaus, you might see the Central, West and South plateaus in the morning. The North and East plateaus are more rocky.
The North peak is the highest point in northern China (3058m) and you may notice the thinness of the air when climbing the temple steps – but not to the extent of getting altitude sickness. In theory you can choose to see only one plateau, but the minibus company at the foot of Dàiluó Peak likes to have at least 6 customers for each minibus.
Visiting one plateau not just saves you money: if you arrange it correctly you should be able to have more ‘plateau time’ and less ‘minibus time’ which could make you day much more enjoyable.
The bus ticket for individual plateaus is around 80 yuan per person. 350 yuan per person to see all five peaks.
The South（南）plateau is the lowest altitude (2474m), the greenest, and might be the nicest one to visit if you only see one.
The weather is likely to be slightly milder, better for a picnic or a short ramble. Maybe you could stop at Jīngé Temple (金阁寺 Jīngé Sì). At the Central or Western plateau, you might see more wild flowers. The plateau monasteries are not equipped to supply food to tourists. I suggest you stock up at the start point on snacks.
Please understand in one day’s travel, you will have to use the toilets. Please understand the toilets at the monasteries are raw old-style, communal, outdoor squat, dirty and stink.

Temple etiquette
When stepping over the plank of wood at the foot of each door. It is best to enter and exit on the right, and use your right foot first.
Please pay attention to the signs, you should not take photos in some places.

How to get to Mount Wutai?

Wǔtái Shān is in northeastern Shanxi, near the border with Hebei. The core area for visits is the township of TaiHuai 台怀镇located in the mountain. It is about half way between Taiyuan and Datong, the two largest cities in the province. These two cities have the two nearest airports, and Wǔtái Shān can be reached by bus from each of these cities in about 4-5 hours.
Taiyuan is the nearest airport if you organize flights from Guangzhou, Beijing and Shanghai.
The train station called “Wǔtái Shān” is not in Wǔtái Shān, but in Shahe, about 50 km (an hour) away from Wǔtái Shān itself. The train stations that serve this route are small. Major train stations in the vicinity of Wǔtái Shān are Taiyuan and Datong; buses and taxis run from either city. Access to Wǔtái Shān is easiest from Xinzhou, the closest city of intermediate size.

Starting from Feb. 2020, the covid19 pandemic makes the international travel difficult and much less than before. Hopefully my video will give you some guide for your travel someday in the future. Thanks for watching, please subscribe to my channel and will continue to enjoy more China tours with me. 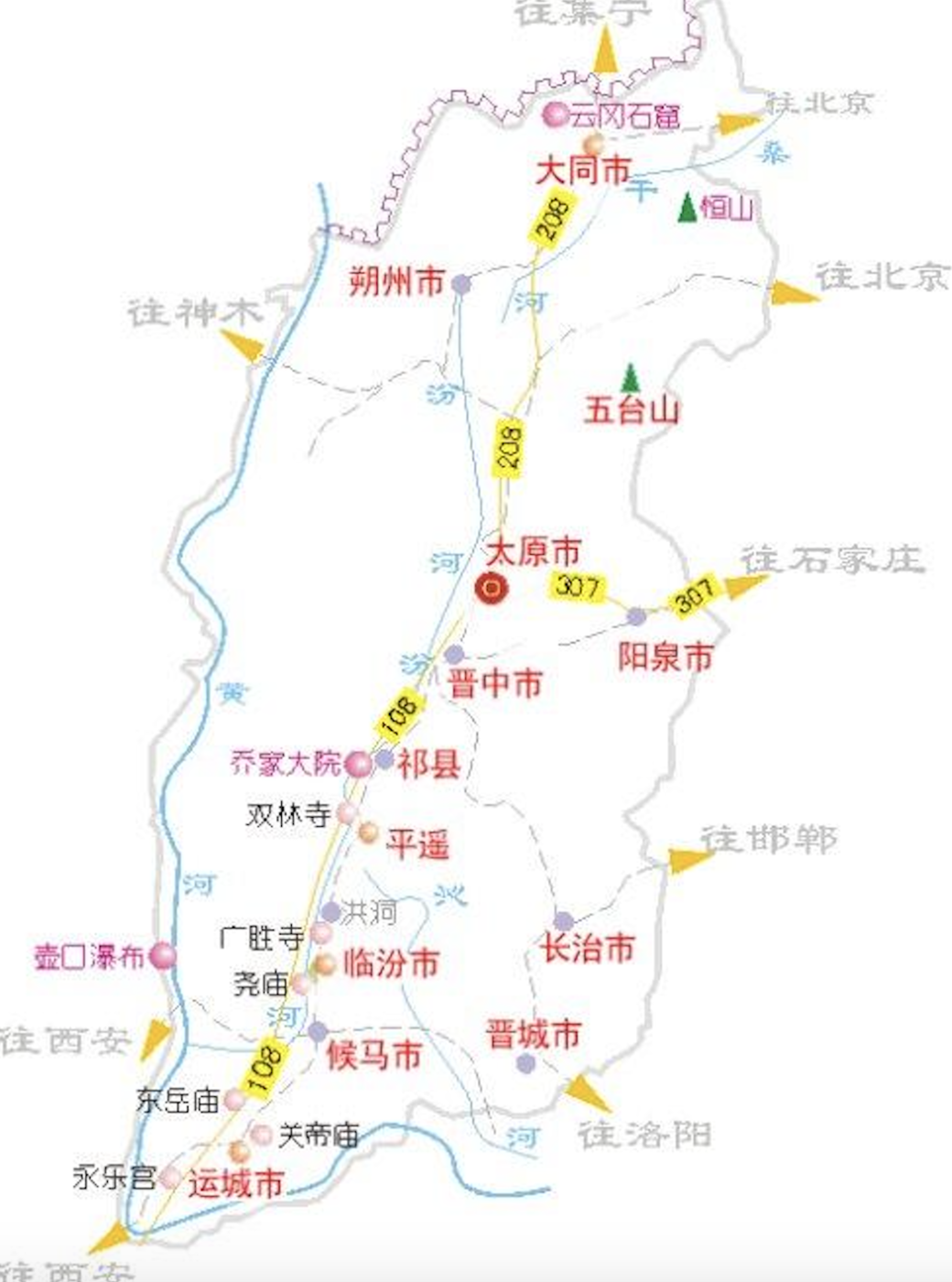 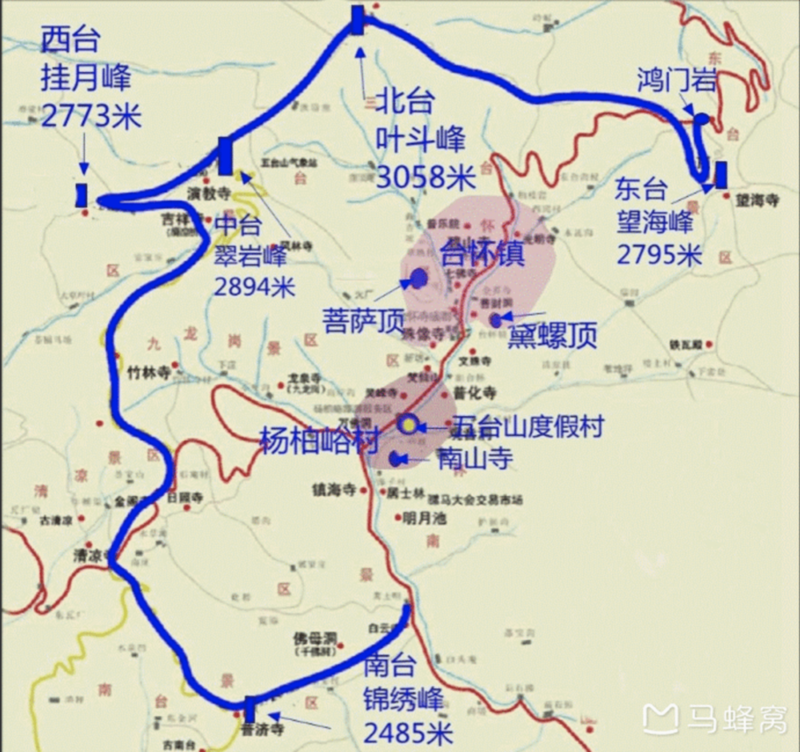